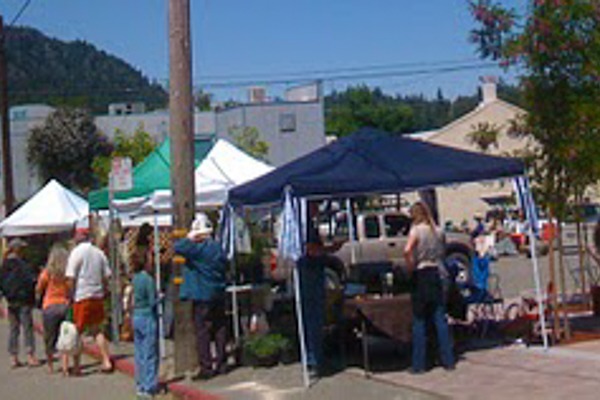 So I’m back from a week in the Northern California sun, with vague reports of it snowing here while I was gone. Bummer, I thought, sipping wine in 75 degree heat in the beautiful Anderson Valley as the weather app showed snowflakes back in Boulder. So yeah, Cali was nice: verdant, sunny, relaxing: got more hugs in a three-block radius back in Southern Humboldt than a month here. Yes, I grew up in Humboldt (insert weed joke here) and don’t get home too often. But it was one particular block in my one-horse, no stoplight town where I grew up that brought to mind our own lovely downtown. My dad is a community organizer and activist back home, and almost a decade ago he and some other locals embarked on a plan to create a town square on square block of what was a gravel-ridden parking lot in the middle of town.

Strange how we find ourselves doing similar things I thought, as I walked through the dozen charming farmers’ stalls that lined a block of pitted pavement. But there it was, a decade after they had dreamed it, starting to take shape and become a center for the community. Couples were enjoying coffee at cafe tables under newly planted trees. An accordion and guitar played gypsy tunes and the square was humming with vibrancy. They had raised hundred of thousands of dollars, replaced the rocky ground with landscaping, trees, different levels, and provided a meeting place. They had a sign on a small booth off to the side that was selling popcorn and showed what their vision of the place was. It is slowly marching towards a complete reality. People stopped my father with advice, thank you’s, and the like. They asked what I did and I had to smile and said I helped take care of a similar thing in the Rockies, a little larger perhaps, but basically the same.

It took years to get that town square underway even in a small town, and still they have to fight every week with the county to close the road for the farmers’ market, to argue with the businesses who want more parking, and figure ways to keep the homeless from spending all their time lounging on the new benches with their dogs. Issues I have become accustomed to working here in same arena, only with few more blocks to take care of. They dream of a pop-jet fountain even if it costs more then they will ever have, but they keep at it. One step at a time, trying to create that vision of a central gathering place carved out of the scraggly NorCal hills.

It made me appreciate the unique and wonderful partnerships that make our downtown work so well. And what a gem it is to have the Pearl Street Mall in Boulder; a place where people can gather and exchange ideas, stop for a cup of coffee and a hot dog, play music or hold a their festivals. That inviting atmosphere and the commonality of having such a transcendent place be the heart of a town is not only rare but to be cherished and nurtured. Back in California, as I stepped back to snap a picture of it all, I realized in that little way that makes your heart glow just a bit, that there it was, taking shape right before my eyes again, miles away. Who knows what it will become, but I look forward to seeing more of it, as they look to us and our successes. I look forward to getting more hugs, and sipping my own coffee under its towering trees someday.