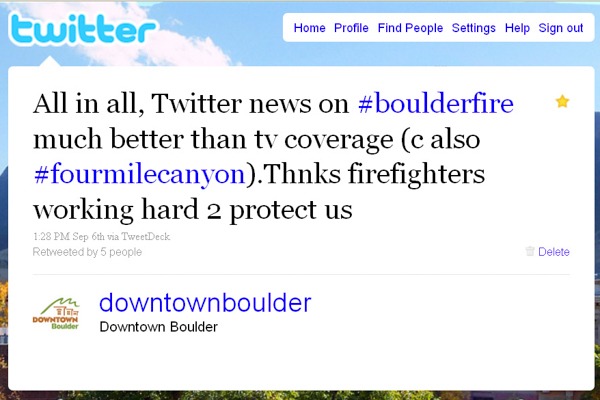 As the ash cloud wafted towards my North Boulder neighborhood and the Four Mile Canyon fire started in earnest yesterday morning,  I was at home watching Mardy Fish lose in the US Open and instantly tried to find more on the impending inferno.  Clicking on through the channels was fairly useless though, the information wasn’t what was happening now, so I opened the laptop in front of me,  launched myTweetdeck and noticed the hashtag for #boulderfire fairly immediately  People were on it from the start, @fishnette (Sandra Fish) leading the charge with @andrewhyde and others posting photos, scanner updates and info in real time. It was hard to not look away after that as the twitter community joined in offering support, telling each other who to contact for help and CU’s innovative @epiccoloradoaggregating the twitter communities feeds into one massive online spreadsheet.  Even the Boulder Sheriff asked Twitter for help to notify evacuation areas when the reverse 911 stalled out for a few hours. To sit back and watch the laptop screen constantly refreshing as the news on the television lagged far behind, I was reminded how far this new media has become and what a resource it can be. As the day wore on and we wondered if the fire would spill down the canyon towards our neighborhood, I couldn’t put the iPhone down as we traveled in and out the smog. Even as the hashtag got crowded during the day, there were posts for people available to take in homeless animals, beds offered to those without and word spread about which evac. centers were open and where to go.

Today, as I rose to an eery fog-like smoke that permeated everything inside my house, Downtown businesses were opening up too; Trek Light Gear offered the use of hammocks to anyone displaced, Atlas Purveyors was willing to run donations over the Humane society,  The Cup tweeted that it had coffee and food to those affected, The Hotel Boulderado offered some rooms and the Boulder Public Library set aside 8 computers for those caught up in the tragedy. Of course those are just a few of the many business in Boulder who have used the power of the web and twitter to help those in need.

As we get better at Twitter,  we see again what an amazing resource it can be.  It’s not my first time seeing Twitter work wonders in a natural disaster, two years ago in my wife’s hometown of Bozeman, Montana, a leaky gas main blew up half block in that town and from my desk in Boulder I was able to follow in real time the wonderful and generous offers that poured in from the local community to help those in need.

So viva new media, and the continued power of community that it creates in good times and the bad.